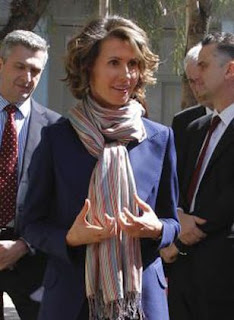 ".....Syrian opposition figures welcomed the ban but cautioned that it would have little effect. "The EU sanctions send a clear message that the more the regime carries on killing civilians the more the doors will shut to any exit strategy," said Ghassan Ibrahim, an independent. "Hitting the family underlines the fact that the country is run like a family business not as a legitimate state. They are like a mafia gang.

"Look: Assad's brother looks after the military, one brother-in-law runs the business and another runs the mukhabarat [secret police], Anisa behaves as if the family owns the country and the opposition are just terrorists. The sanctions themselves won't stop the massacres. They won't change anything on the ground. But they send a moral message to the regime. Their money is probably already safely in Dubai and Russia. It is the Syrian people who are paying the price. Sanctions are not enough to get rid of the regime. It did not happen in Iraq or Libya and it won't happen in Syria. But if the sanctions are lifted the regime will declare victory, so the pressure must continue."

Malik al-Abdeh, who runs the opposition Barada TV, said: "This is important for Asma personally. Her public image has been damaged beyond repair. She can no longer market herself as anything other than a dictator's wife. But the actual effect will be inconsequential.""
Posted by Tony at 4:42 AM