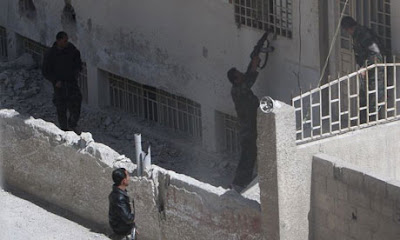 Artillery and anti-aircraft gun barrages hit the suburbs of Harasta and Irbin, retaken from rebels by Assad's forces two months ago, and army helicopters were heard flying over the area, on the eastern edge of the capital, the activists said.

Assad's forces reasserted their control of Damascus suburbs in January after days of tank and artillery shelling that beat back rebels and lessened street protests against the 42-year rule of Assad and his father, the late President Hafez al-Assad....

But as Assad made advances on the ground, he appeared to suffer a setback on the diplomatic front, with key ally Moscow adopting a sharper tone after months of publicly standing by his government.

"This, unfortunately, has in many ways led the conflict to reach such a severe stage."

Lavrov spoke of a "future transition" period for Syria....

After failing to hold significant stretches of land, analysts say the rebels appear to be switching to insurgency tactics, pointing to bloody car bomb attacks in two major Syrian cities at the weekend and the sabotage of a major rail link...."
Posted by Tony at 4:12 AM