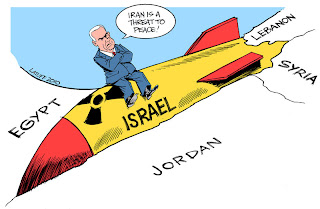 Recent raids on Gaza were not just about allocating more money to defence - they were also about war with Iran.

".....The recent attack is, however, not only about allocating more money to the military; it is also about Iran. The media continuously drew a connection between the Islamic jihad, which launched most of the rockets against Israel, and Iran. The IDF spokesperson pointed an accusing finger towards Teheran, claiming that it is transferring weapons and money to the Islamic Jihad. A couple of days later a headline in Yisrael Hayom declared, "Iran is Behind the Jihad's Rocket Attack". Hence, another objective was to show the Israeli public that Iran, by means of a proxy, had already begun attacking Israel.

Next, a link was drawn between Iron Dome's success and the perceived Iranian threat. Ynet cited a military general who stated that the escalation is about Gaza today, "but I am not sure that this is the scenario for which I am preparing the fighters. There are threats from the north and threats from further away". A columnist noted that Iron Dome's effectiveness "helped demonstrate to everyone that the Israeli home front enjoys a relatively good defense today... Hamas, Hezbollah and Iran will have to reconsider their strategy of missile terrorism..."

Indeed, many analysts emphasised that only a handful of Israelis had been injured, but none fatally. The fighting, they accordingly claimed, produced relatively little pressure on the home front. Alon Ben David from Channel Ten summed up this perspective when he wrote: "There is no doubt that Iron Dome alongside the population's exemplary behaviour prevented casualties on the Israeli side and enabled Israel to come out of this cycle - I would say - with a sense of satisfaction. Twenty-two [combatants] were killed on the other side, and another three or four civilians; we have zero losses… under these conditions we can conduct a monitored [fray] that we initiate…"

Zvi Barel from Haaretz was one of the lone critical voices, providing readers some insight into Israel's real objectives. He exposed the logic behind the Iron Dome's glorification, claiming that it helps Netanyahu "sell" the planned attack against Iran: "After Iron Dome demonstrated its 95 per cent effectiveness, there is no better proof to Israeli citizens that they will not suffer serious damage following an assault against Iran. Escalation in Gaza is good for Israel, meaning for those who support attacking Iran".