Killing emos, and the future, in Iraq 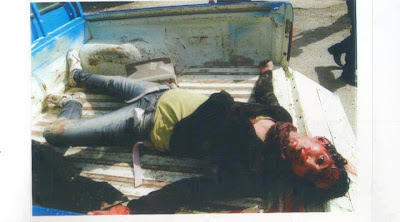 Youths identifying with the 'emo' music subculture are among the martyrs of the Arab world's revolutionary wave.

"Irvine, CA - With everything else plaguing Iraq today - continued sectarianism, rampant corruption, irregular electricity, barely functioning healthcare, ten years' worth of depleted uranium shells (courtesy of the US occupation) causing cancer and birth defects - hardcore Shia militants have decided that the gravest threat to Iraq comes from the small (but growing) number of fans of the genre of post-punk music known as "emo".

In the past several weeks, an unknown number of young Iraqis have been murdered - in cold blood - reportedly because of their supposed love for emo, a genre of hardcore rock that emerged in Washington, DC, in the late 1980s and early 1990s and known originally as "emotional hardcore" or "emocore". Emo is distinguished from other forms of hardcore by its more "pop" sound and its lyrical focus on emotional, expressive or confessional lyrics.....
Attacks on young people in the Muslim world because of their taste in music is neither new nor unique to the region. So-called "extreme" forms of heavy metal, hip-hop, punk and hardcore music have long been popular, not merely in the West but globally - precisely because the anger, despair and intensity of the music reflects the tumult of emotions and uncertain identities that define adolescence and young adulthood in every culture.

The Middle East is a particularly welcoming environment for these types of music because young people across the region have suffered the pain and ravages of war, authoritarian and social oppression with particular ferocity. As a founder of the Moroccan metal scene put it: "We play heavy metal because our lives are heavy metal."

If that's how the kids feel in Morocco, imagine the appeal of metal in a war-torn, occupation-torn and terror-torn country such as Iraq....."
Posted by Tony at 3:37 AM