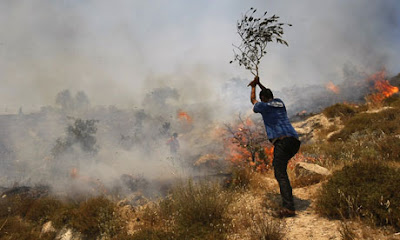 "Jewish settlers in the West Bank are conducting a systematic and expanding campaign of violence against Palestinian farmers, families and children with the Israeli authorities turning a blind eye, according to confidential reports from senior European Union officials.

In two reports to Brussels from EU heads of mission in Jerusalem and Ramallah, obtained by the Guardian, the officials found that settler violence against Palestinians has more than tripled in three years to total hundreds of incidents.

"Acts of settler violence are becoming a serious concern for the Israeli state which has so far failed to effectively protect the Palestinian population," says the report sent to EU ambassadors in Brussels last month.

The report notes 411 attacks by settlers last year resulting in Palestinian casualties and damage to property, against 132 attacks in 2009.

The campaign of intimidation is especially targeted at Palestinian farmers and their livelihood, the reports found, noting that settlers damaged or destroyed Palestinian olive groves en masse....."
Posted by Tony at 4:11 AM