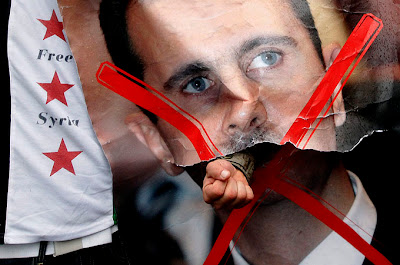 Syria's uprising could end up looking like Libya, Algeria, Kosovo, or perhaps something different altogether.

"As the Syrian revolution enters its second year, three scenarios loom on the horizon. However, as they say in Arabic: “their sweetest is bitter”....

The balance sheet is hardly encouraging. With more than eight thousand Syrians dead, a quarter of a million displaced and countless imprisoned or tortured, the opposition is arming itself in self-defence and its regional supporters are chipping in with western complicity....

But time is NOT on Assad’s side. Nor is it for that matter on Syria’s side.

The arming of Syria’s popular opposition despite the crackdown has for all practical purpose torpedoed the regime’s deterrence and undermined its military gains.

Alas, thousands more are bound to die and Syria could descend into civil war if the nation’s wrong-headed leadership doesn’t draw the right conclusions.

The people are showing formidable capacity to withstand the crackdown and organise.

Two decades ago, the secular military regime in Algeria was able to crackdown hard on the opposition following its substantial electoral gains thanks, in no small measure, to France’s explicit and US’s implicit support.

The deaths of tens of thousands of civilians and security forces were 'justified' in Western circles on the basis of the right of a regime to fight terrorists and extremists within a sovereign country.
The Assad regime hopes Russia and China will provide it with a similar cover to ‘finish the job’.....
The Libyan scenario

Syrian opposition leaders are hopeful Arab/Gulf pressure, recent declarations and visits by Russian and Chinese diplomats to the region, and mounting pressure from Western nations on their UNSC counterparts in light of the spiralling of violence in Syria, could lead to greater consensus in the international community in favor of isolating the Syrian regime.

Increasing numbers of Syrian opposition leaders hope that serious overtures towards Moscow and Beijing will lead to consensus around foreign military intervention under the "Right to Protect" on the Libyan model that includes a no-fly zone.

Back to the future: The “Syrbian nightmare”

As the regime builds on the Algerian scenario and many in the opposition bet on the Libyan scenario, regional and Western powers might entertain a Serbia/Kosovo like scenario.

Back in the late 1990s, Kosovo’s opposition to Belgrade was armed and for a whole year. In 1998-1999, it fought against the Serb government. When the humanitarian and security situation deteriorated, a Western led ‘Coalition of the Willing’ intervened militarily without a UN Security Council resolution that Moscow was likely to veto.

Seventy eight days of US bombardment followed by NATO direct intervention and the division of the country. They argued their decision was ‘legitimate’ even if it wasn’t necessarily legal.

Something similar is building up in Syria....

Assad, and the test of patriotism

The Syrian revolution has taken far longer than the other Arab revolutions due to the regime’s unity and divisions in the opposition.

Despite its secular-nationalist rhetoric, which shouldn’t be discounted nor underestimated as source of legitimacy in a country like Syria or in the Mashreq (East) in general, the regime has based its power mostly on sectarian and personal loyalties.

For more than four decades the regime has made sure there is no day light between leader, family, clan, sect, regime, army and state.

These layers of power have secured the position of Assad family and clan at the helm of the country. But it also led to terrible repression and injustice.

Contrary to conventional wisdom, no less Sunnis benefited from the regime than Alawaites. Indeed many if not most Alawaites remain marginal and poor in Assad’s Syria....

Ultimately, when the chips are down, personal sacrifice for public good is the test of patriotism.

Otherwise, clan and the Alawaite minority, and military must sacrifice the dictator for the sake of future unity, peace and justice in the country.