Palestinian prisoner of conscience on trial for defending right to protest 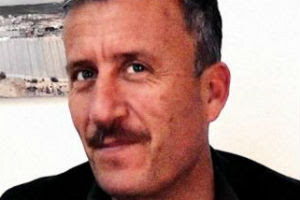 "It’s a year since Bassem Tamimi was arrested by the Israeli army for organizing non-violent protests against the expansion of illegal Israeli settlements on land belonging to his village.

The 44-year-old father of three lives in al-Nabi Saleh in the occupied West Bank. Prior to his arrest on 24 March 2011 he was a public employee and studied for a Masters degree. His military trial continues.

In the meantime, Bassem, a prisoner of conscience, remains in detention awaiting the verdict, while his family in al-Nabi Saleh continue to be harassed by the Israeli military.

Most recently, Israeli forces raided his house at around 2am on 21 March, when his wife, mother, and three children were sleeping. About 10 heavily armed soldiers entered and searched the house without presenting a warrant. They left after an hour and confiscated two computers, a camera, and some CDs and papers.

A video of the raid shows Nariman, Bassem’s wife, asking the soldiers to explain their actions, but the soldiers refuse to answer. It also shows five armed soldiers, some of them masked, searching a room where the terrified children are in bed.....

This injustice should not be allowed to continue.

Bassem Tamimi should be released immediately and unconditionally, and the Israeli authorities should immediately stop the construction and expansion of Israeli settlements – which violate international law – as a first step towards removing Israeli civilians living in them.

At the very least, the residents of al-Nabi Saleh must be allowed to protest peacefully against illegal Israeli settlements without the fear of Israeli military violence."
Posted by Tony at 3:57 AM