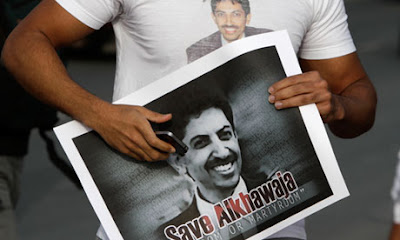 Verdicts passed by military court after anti-government protests against 20 activists, including eight life sentences, to stand

"A Bahraini civilian court has upheld sentences against 20 leaders of last year's uprising, the government's Information Affairs Authority said, rulings that could fuel political tensions in the Gulf Arab country.

The verdicts, originally issued by a military court, include eight life sentences. Defence lawyers have said the civilian court's decision may still be appealed against.

Bahrain has suffered political unrest since a protest movement dominated by majority Shia Muslims erupted in February 2011, during a wave of revolts against authoritarian governments across the Arab world.

Eight of the 20 men received life sentences in a military court last year, including rights activist Abdulhadi al-Khawaja and opposition leader Hassan Mushaimaa, who had called for the Bahrain monarchy to be turned into a republic....."