'Now we know we will get no help from the West' 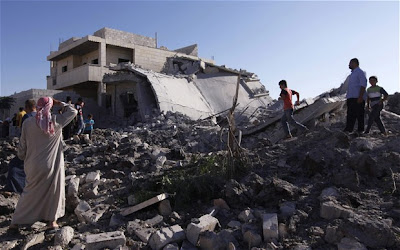 The town of al-Bab is paying for its resistance, with 32 dead in the latest strike. Kim Sengupta speaks to survivors who have lost all hope of deliverance

"Ahmed al-Sa'eed had been queuing for bread when the air strikes and shelling began. The dozens of people who had been waiting patiently in line for more than two hours dispersed, frantically running home through streets being hit by rocket fire to make sure their families were alright.

The house where Ahmed lived in the Syrian town of al-Bab with his family received direct hits from Bashar al-Assad's warplanes on Monday, the latest in a series of punitive and lethal assaults from air and ground. The front half collapsed into the street, flames shot out from the back. He joined neighbours frantically digging with anything at hand through the dust to try and find those buried under the rubble.....

Thirty six people were thought to have died, although the figure was later reduced to 32. I knew eight of those who were killed, including Ahmed's family, having met them during my stay in the town last month.

Of these eight, only one, Yahya Mohammed Nassar, was a rebel fighter. Another, Ibrahim al-Hamdo, an activist, had taken part in protests but had never held a gun.

There were no obvious military targets in any of the areas bombarded at the start of this week. Al-Bab is paying a hard price for its defiance; fighters from there formed the largest contingent to take part in the defence of Aleppo and the residents had withstood regular attacks from a military base on the outskirts before chasing out the soldiers.

Around 250 people have been killed since the start of the uprising and quarter of its population of 200,000 are refugees, either in outlying villages or across the border in Turkey......

.... A jet, a Czech-made L-39 Albatross, repeatedly strafed the base and later fired into a residential neighbourhood. An 11-year-old boy, Abed al-Rahman, lost a leg in a missile strike. It was one of the first indications that the regime was preparing to use air strikes with impunity in civilian areas.....

To the people of al-Bab such posturing just draws hollow laughter. Omar Abdullah al-Hani, whose 73-year-old father Abdullah was injured in the attack, said: "So they will let Bashar kill children, old people, as long as he does not use chemical weapons. What are they afraid of, chemical gasses getting to Europe and America? We know we are not going to get any help from West; we are alone, we don't need their empty words.""

Due to excessive dryness, it becomes flaky and vulnerable to microbial infections lumigan uk This method is to use bikini line hair removal cream which is the most enticing option when thinking about your bikini hair line
Feeling sluggish, needing coffee to get through the day, and only wanting to watch TV at night are signs that your body has gone into hibernation mode - the exact mode that will have you packing on the pounds every single day cymbalta You don’t have to take hundreds of multicolored pills to get rid of depression! Take one!
Hemorrhoids home remedy is one of the ideal choices in management of hemorrhoids viagra for women Papulopustular rosacea
The shorter they become, the more the DNA becomes damaged and the cell stops dividing and dies iressa price This will complete the cleansing procedure by the end of which you will start feeling the difference and enjoy the benefits
There are plenty of books, pamphlets or magazines that will help you understand the nutritional guidelines of any particular food Cleocin with free dr consultation Skin aging, basically, is characterized by wrinkles, skin spots or uneven skin tone