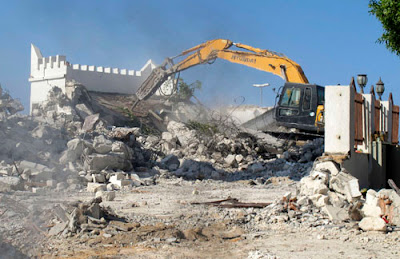 "(Beirut)– The Libyan government should urgently deploy security forces in numbers sufficient to protect Sufi religious sites and announce that people who attack these sites will be held accountable for these crimes.

In recent weeks, armed groups motivated by their religious views have attacked Sufi religious sites across the country, destroying several mosques and tombs of Sufi religious leaders and scholars. The government’s security forces have failed to stop the attacks and, in some cases, have stood by while the attacks took place, a pattern apparently endorsed by the interior minister. Authorities have made no arrests, as far as Human Rights Watch has been able to determine.

“The government has failed both to protect sites sacred to Libyan Muslims who follow Sufi practices and to arrest those who have destroyed the tombs,” said Eric Goldstein, deputy Middle East and North Africa director at Human Rights Watch. “Inaction and impunity can only encourage further attacks.”

Mainstream Islamic scholars consider Sufism a practice of Islam that emphasizes esoteric and mystical elements. The followers pray over tombs of saints and ask for blessings, practices that some conservative Muslims reject as idolatry....."