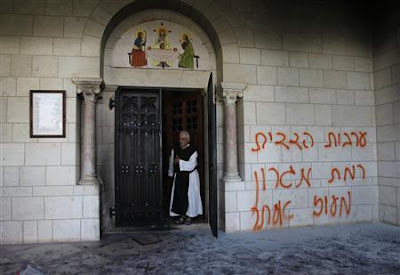 "(Reuters) - Vandals set fire to the doors of a Christian monastery near Jerusalem on Tuesday and daubed pro-settler graffiti on its walls in a possible retaliation for the eviction of families from an unauthorized outpost.

The name of the unauthorized Migron settlement, which was cleared following a court order on Sunday, was scrawled on the well known Latrun Monastery, alongside the words "Jesus is a monkey", said police.

Israeli security officials had said they were worried the eviction of 50 families from Migron, near the West Bank city of Ramallah, might provoke retaliation from a vigilante settler group known as "Price Tag"......"