Bahrain must free prisoners of conscience after outrageous verdict 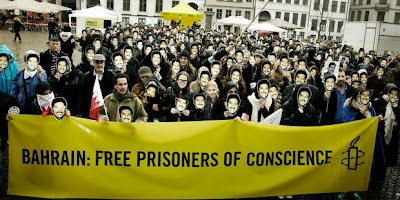 "The decision by Bahrain’s appeal court to uphold sentences against 13 opposition activists and prisoners of conscience is outrageous and the authorities must ensure it is overturned and the activists immediately and unconditionally released, Amnesty International said.

The High Criminal Court of Appeal in Bahrain on Tuesday upheld the convictions and sentences of the 13 men, who were convicted last year before military courts on charges related to anti-government protests.

Amnesty International sent a trial observer to Bahrain who was present in court.
“Today’s court decision is another blow to justice and it shows once more that the Bahraini authorities are not on the path of reform, but seem rather driven by vindictiveness,” said Hassiba Hadj Sahraoui, Deputy Director of Amnesty International’s Middle East and North Africa Programme.

“Today’s verdict further engulfs Bahrain in injustice. Instead of upholding the sentences, ranging from five years to life in prison, the Bahraini authorities must quash the convictions for the 13 men who are imprisoned solely for peacefully exercising their human rights and release them immediately and unconditionally.”

The 13, who include prominent activist Abdulhadi Al-Khawaja and opposition political activist Ebrahim Sharif, were originally sentenced by a military court in June 2011 to between two years and life in prison on charges including “setting up terror groups to topple the royal regime and change the constitution”.

All maintain their innocence......"