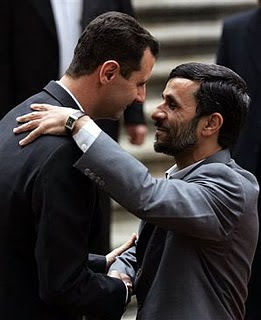 Iran is intensifying its support for the regime of Bashar al-Assad by sending 150 senior Revolutionary Guards commanders to Syria to help repel opposition attempts to overthrow the government.

"Western intelligence officials say that Iran's president, Mahmoud Ahmadinejad, has personally sanctioned the dispatch of the experienced officers to ensure that the Assad regime, Iran's most important regional ally, survives the threat to its survival.

In addition, Iran has shipped hundreds of tons of military equipment, including guns, rockets, and shells, to Syria through the regular air corridor that has been established between Damascus and Tehran.

Intelligence officials believe the increased Iranian support has been responsible for the growing effectiveness of the Assad regime's tactics in forcing anti-government rebel groups on the defensive.

In the past few weeks, pro-Assad forces have seized the offensive by launching a series of well-coordinated attacks against rebel strongholds in Damascus and Aleppo.

The Iranian operation to support Mr Assad is being masterminded by Qassem Suleimani, the head of the Guards' Quds force which is responsible for overseeing Iran's overseas operations....."