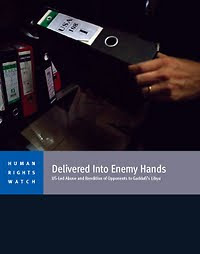 US-Led Abuse and Rendition of Opponents to Gaddafi’s Libya

"This report is based on interviews conducted in Libya with 14 former detainees, most of whom belonged to an armed Islamist group that had worked to overthrow Gaddafi for 20 years. Many members of the group, the Libyan Islamic Fighting Group (LIFG), joined the NATO-backed anti-Gaddafi rebels in the 2011 conflict. Some of those who were rendered and allegedly tortured in US custody now hold key leadership and political positions in the country."

"....“Not only did the US deliver Gaddafi his enemies on a silver platter but it seems the CIA tortured many of them first,” said Laura Pitter, counterterrorism advisor at Human Rights Watch and author of the report. “The scope of Bush administration abuse appears far broader than previously acknowledged and underscores the importance of opening up a full-scale inquiry into what happened.”

The report is also based on documents – some of which are being made public for the first time – that Human Rights Watch found abandoned, on September 3, 2011, in the offices of former Libyan intelligence chief Musa Kusa after Tripoli fell to rebel forces.

The interviews and documents establish that, following the September 11, 2001 attacks, the US, with aid from the United Kingdom (UK) and countries in the Middle East, Africa, and Asia, arrested and held without charge a number of LIFG members living outside Libya, and eventually rendered them to the Libyan government......."