Fighting for the Right to Walk 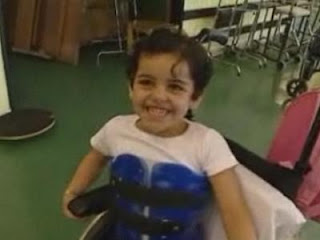 Left: Samar, 4, was supposedly one of the lucky ones on that day.

"......Nearly eight months after the bloodletting of Operation Cast Lead, a 34 page report by the UN High Commissioner for Human Rights was released on August 13, pressing for a lifting of the Gaza blockade. The new report, which will be presented along with Goldstone’s report in September, lays out the many incomprehensible details of how the Israelis battered the Strip, one of the most impoverished and the most densely populated piece of Planet Earth. The details were laid out, chastising Israel for snubbing the most basic norms of human decency......

One has to wonder, and even after so many years of witnessing such amazing ingenuity when it comes to tormenting the Palestinians, does the Israeli government, and further, does the Israeli public feel any sense of shame, remorse or even the slightest embarrassment when the most basic norms of human behavior must be laid out in so elementary a fashion, reminding, and then re-reminding them that it is a fundamental human right to have access to something as basic as food and clean water?......"
Posted by Tony at 5:57 PM