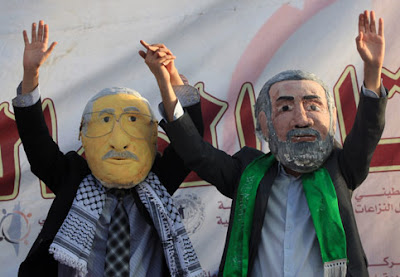 ".......
Halevy's bloodless coup against Arafat was planned such that Arafat would remain as a "titular head," but would be stripped of all his powers, which would be vested in a new prime minister. The man selected for this job "on the urging of Washington and the Israelis," writes McGeough, was Mahmoud Abbas, who later succeeded Arafat as Fatah leader and PA president. Control of funds was vested in a finance minister; an unknown World Bank official called Salam Fayyad was drafted in for this role. Today, Fayyad serves as Abbas' appointed prime minister.

It is hard to find in history an example of a liberation movement being transformed so completely into a tool of the oppressor. But understanding this sad reality is the key to understanding why talk of intra-Palestinian "reconciliation" is futile as long as this situation persists.

The failure of the recent Egyptian mission has inevitably led to the postponement of the scheduled Cairo reconciliation round until after Ramadan. In the absence of the will to declare the reconciliation effort sterile, most likely this will not be the last postponement."
Posted by Tony at 7:56 AM