Why Did The Arab Frog Die? 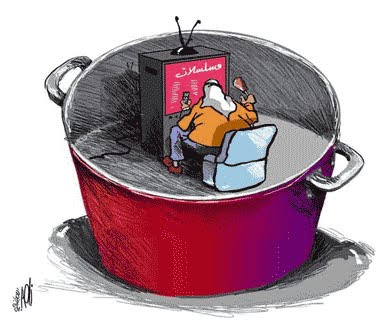 This cartoon by Naser Jafari provides the answer:

The proverbial frog died because the heat under the pot in which the frog was boiled was increased GRADUALLY. If the heat shock was sudden, the frog could have jumped out of the pot and saved its life.

The same is true with the Arab masses. They have been in a catatonic state, unable to react in time to any of the major events affecting their lives. They have been drugged into this passive state and a culture of escape by the endless TV stations and their deliberate, state-sanctioned, sleaze and serials.
Posted by Tony at 9:33 AM