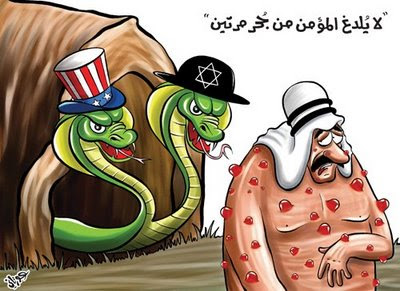 COMMENT: The good cop- bad cop game playing never stops. The goal is to fool the Arab fools and to line them up against Iran. The fools are more than willing and ready.

"The Obama administration's approach to two of the world's most intractable and dangerous problems, the Israeli-Palestinian conflict and Iran's nuclear programme, is to link them together in the search for a solution to both.

The new US strategy aims to use its Iran policy to gain leverage on Binyamin Netanyahu's government.

Sanctions planned against Iran's energy sector if Tehran does not compromise on uranium enrichment by the end of next month are not only aimed at pre-empting Israeli military action; they are also a bargaining chip offered in part exchange for a substantial freeze on Jewish settlements in the West Bank.......

The Obama administration is setting out to juggle two potentially explosive global crises, while walking the tightrope of a shaky and nervous global economy. It is not going to be easy, but Washington appears to have decided it has no option but to try."
Posted by Tony at 3:08 AM