We will return. We will come back. We will never forget. 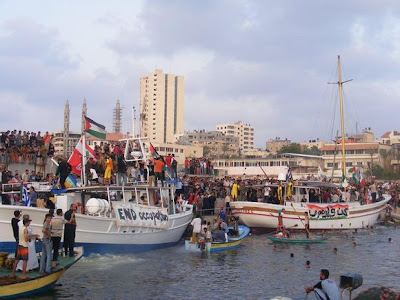 We had MADE IT TO GAZA.

From a distance, the shore looked like stalagmites had sprouted across the landscape. Every piece of sand, every section of pier, every chunk of rock was occupied by people. Thousands of Palestinians greeted us, blowing whistles and cheering and high-fiving each other. At first, just one small boat came out to greet us. Then every kind of vessel swarmed around our two small fishing boats, boys jumped in the water retrieving the balloons we had inflated, stuffing them inside their shirts and tying them onto their small boats. The balloons said FREE PALESTINE with a dove and an olive branch on them. They were in the colors of the Palestinian flag... white, red, green and black. Once we saw the shoreline, many of us had started to blow the balloons up, dropping them onto the deck of the boats, a small pool of bouncing color ready to be set free..........

Much has been written over the past year about our dedication and determination to get to this small enclave, shut off from the rest of the world by Israel's draconian blockade. None of that was on our minds or in our hearts that day. For all of us, Palestinian and International, August 23, 2008 will be a day that none of us will ever forget. If we get discouraged, we pull out that memory. When our boats were rammed by the Israeli navy, we remember that day. When our boat was hijacked and our passengers kidnapped and thrown into prison by the Israelis, we are more determined to continue our missions.

We will return. We will come back. We will never forget.

Greta Berlin
Co-Founder, The Free Gaza Movement"
Posted by Tony at 7:00 AM