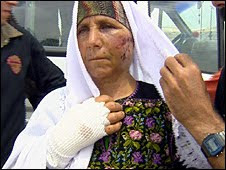 As Benjamin Netanyahu is pressed by the US to halt the construction of settlements, Donald Macintyre exposes the reality of surviving in the West Bank

"......It was close to here that the couple were severely beaten last summer by four masked, club-swinging Jewish settlers in the barley field. Tamam, her face still bleeding after being clubbed in the jaw, was driven in an Israeli Army ambulance to Beersheeva's Soroka hospital, where she required three days of treatment.

And it was here that they received the news last week that the Israeli police had closed an investigation without making charges, even though the attack was caught on video, causing shock and outrage across Israel and beyond when it was shown on television last year.......

But it is the Palestinian Nawajas who have found it difficult to live "normal lives" since the attack on their five-acre plot in the arid and remote hill country south of Hebron in sight of the red-roofed Jewish settlement of Susiya. "I cannot leave this place for a single day or the land will be theirs," said Mr Nawaja, 61, who was also injured in the attack 14 months ago......"

Click Here to See This BBC Short Video of the Attack of the Settlers.

From BBC: Settler attack investigation ends
Posted by Tony at 6:47 AM