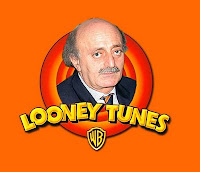 ".........Arguably one of the most significant turning points can be attributed to an astonishing shift in the allegiances of the PSP leader, Walid Jumblatt, on 2 August – from seemingly being Syria's arch-enemy in Lebanon to heading back into the Damascene fold. The ramifications of Jumblatt's departure from the (Saudi and US-backed) March 14 alliance continue to send tremors through the country's fragile political system. If Lebanon can be said to represent a microcosm of the Middle East's politics, then Jumblatt can be described as a bellwether of prevailing trends in political power. Indeed, he described himself as "an exceptional and independent case".

His defection is evidence of the death of the Bush conceptual framework for the Middle East that divided the area into "moderates" and "extremists". The battle lines were drawn between a US-supported alliance of Saudi Arabia, the Gulf states, Jordan, Egypt, Fatah Palestinians and the Lebanese March 14 alliance versus Iran, Syria, the Lebanese March 8 alliance and Hamas. Previously Jumblatt decided to side with the aggressive new US neocon administration at a time in which Bush's "you're either with us or against us" approach left little room for compromise........

In his history of modern Lebanon, Fawwaz Traboulsi observed that "the Lebanese entity was to be periodically reproduced by means of a compromise between the dominant regional and international powers". It would appear that Jumblatt's change of direction is a symptom of the new compromise of the Obama era towards Syria. What this means for the future of Lebanon will become clearer once its tortuous cabinet negotiations are finally resolved."
Posted by Tony at 2:50 AM