The pitfalls of Palestinian national consciousness 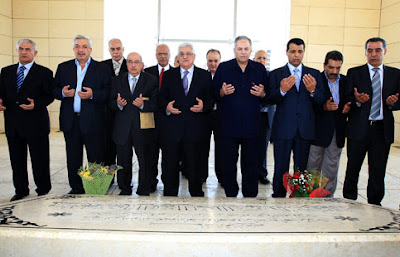 "The sixth congress of the Fatah movement, held in Bethlehem earlier this month, gave us a front row seat to the closing act of an important period of Palestinian nationalism.

True, the conference was held on Palestinian soil, but, ironically, under the watchful eye of Israeli soldiers. The failure of the Palestinian Liberation Movement (Fatah) to achieve any of its declared goals was symbolized in its holding the conference under occupation. This reflects not only the demise of Fatah -- the faction that dominated the Palestine Liberation Organization (PLO) for decades -- but the general demise of contemporary Palestinian nationalism.......

What we saw in Bethlehem is the embodiment of Frantz Fanon's "pitfalls of national consciousness" -- albeit with a Palestinian gown. The irony, of course, is that Fanon was theorizing about the future post-colonial states after independence. He wrote of neo-colonial subjugation of the native elites. Black cars, fashionable suits, bodyguards, are some of the characteristics of the rising nouveaux riches of (occupied) Palestine. Fanon wrote scornfully that "[t]he national middle class which takes over power at the end of the colonial regime is an underdeveloped middle class. It has practically no economic power, and in any case it is in no way commensurate with the bourgeoisie of the mother country which it hopes to replace" (emphasis added).

But are we, in Palestine, close to the end of the colonial regime? Here is the crucial difference between the national bourgeoisie of, say Algeria or South Africa, and our own. Ours have fetishized statehood before attaining independence, a game -- unsurprisingly -- encouraged by the US, Israel and even the official Arab regimes. What is independence at the end of the day? A national anthem, flag, ministries, premierships and presidencies? We already have them.

For Fanon, the cycle of delusion, ostracism and dependency goes on unabated after independence. But we are yet to get there!"
Posted by Tony at 6:29 AM