Our Sons Plundered for Their Organs 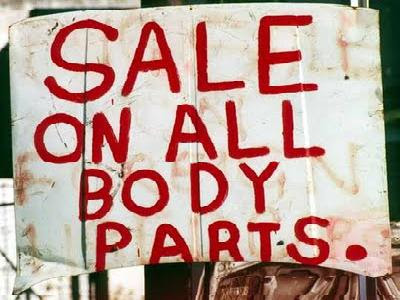 By Donald Boström
(Donald Boström is a Swedish photojournalist, graphic artist and writer. He is a contributor to the Social-democratic evening paper Aftonbladet. He contributed this article (originally published in Swedish, August 17th, in Alfonbladet) to PalestineChronicle.com.)
Palestine Chronicle

"You could call me a 'matchmaker,' said Levy Izhak Rosenbaum, from Brooklyn, USA, in a secret recording with an FBI-agent whom he believed to be a client. Ten days later, at the end of July this year, Rosenbaum was arrested and a vast, Sopranos-like, imbroglio of money-laundering and illegal organ-trade was revealed. Rosenbaum’s matchmaking had nothing to do with romance. It was all about buying and selling kidneys from Israel on the black market. Rosenbaum says that he buys the kidneys for $10,000, from poor people. He then proceeds to sell the organs to desperate patients in the States for $160,000. The accusations have shaken the American transplantation business. If they are true it means that organ trafficking is documented for the first time in the US, experts tell the New Jersey Real-Time News.

On the question of how many organs he has sold Rosenbaum replies: “Quite a lot. And I have never failed,” he boasts......

the gap between supply and demand was still large. 500 people were in line for a kidney transplant, but only 124 transplants could be performed. Of 45 people in need of a new liver, only three could be operated on in Israel.

While the campaign was running, young Palestinian men started to disappear from villages in the West Bank and Gaza. After five days Israeli soldiers would bring them back dead, with their bodies ripped open.

Talk of the bodies terrified the population of the occupied territories. There were rumors of a dramatic increase of young men disappearing, with ensuing nightly funerals of autopsied bodies.......

We know that Israel has a great need for organs, that there is a vast and illegal trade of organs which has been running for many years now, that the authorities are aware of it and that doctors in managing positions at the big hospitals participate, as well as civil servants at various levels. We also know that young Palestinian men disappeared, that they were brought back after five days, at night, under tremendous secrecy, stitched back together after having been cut from abdomen to chin.

It’s time to bring clarity to this macabre business, to shed light on what is going on and what has taken place in the territories occupied by Israel since the Intifada began."
Posted by Tony at 4:36 AM