In a Rotten State 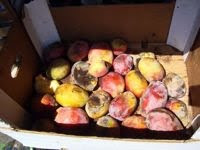 By Eva Bartlett
in Gaza

"....."The Israelis don't allow the fruit to enter Gaza right away. It sits at the crossings for five or six hours under the sun," he said, pointing to a box of rotted mangos......

A report this month by the United Nations Office for Coordination of Humanitarian Affairs (OCHA) notes that during the first five months of 2007, an average of 583 trucks entered Gaza per day. Now, the daily average is 112, of which 70 percent are food products.

With crossings closed or barely functioning, most of Gaza's goods are brought in at steep prices via the tunnels. Last week Egyptian authorities announced a seizure of such goods bound for Gaza before the start of Ramadan. Among the millions of dollars worth of goods seized were wood, glass, electronic equipment and appliances, tyres, carpets, and large quantities of sweets, nuts, and foodstuffs used during Ramadan. "
Posted by Tony at 6:58 AM