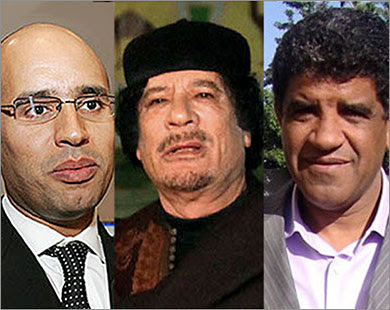 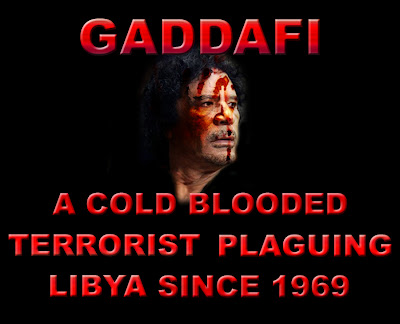 Libyan leader, his second-eldest son and his intelligence chief indicted for crimes against humanity.

Similar indictment against the Rabbit of Syria and his Mafia bosses should follow!

"The International Criminal Court has issued arrest warrants for Libyan leader Muammar Gaddafi, his son and his spy chief, citing evidence of crimes against humanity committed against his regime's opponents.

Judge Sanji Mmasenono Monageng announced the decision on behalf of a three-judge panel in The Hague on Monday, saying the warrants were meant to force Gaddafi and his two confidantes to appear before the court and prevent the possibility of a cover-up.

It was the second time in the ICC's nine-year history that it issued an arrest warrant for a sitting head of state. The ICC indicted Sudanese President Omar al-Bashir in 2009, though he has yet to be arrested.

"State policy was designed at the highest level of the state machinery, and aimed at quelling by any means, including by the use of lethal force, demonstrations of civilians against the regime of Muammar Muhammad Gaddafi," Monageng said.

She stressed that the indictment and warrants for Gaddafi, his son Saif al-Islam, and his military intelligence chief Abdullah Senussi were not proof of guilt, which must be proved at trial.

But she said the evidence submitted by ICC prosecutor Luis Moreno-Ocampo was enough to establish "reasonable grounds to believe" the three were guilty of murder and the persecution of civilians, or "crimes against humanity," and that they should be arrested......"
Posted by Tony at 7:11 AM