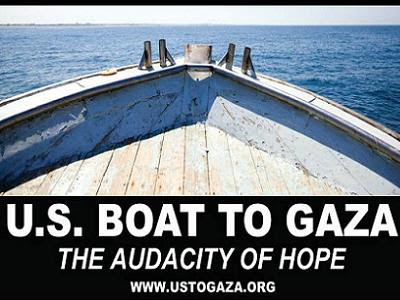 "....Now Clinton is back, speaking in a lucid language which leaves no room for misinterpretation. When it comes to the security and interests of Israel - as opposed to those of the entire Middle East region and all its nations - Clinton, like other top American officials, leaves no room for error. Israel will always come first.

Clinton's forceful language was triggered by the decision of humanitarian activists from over 20 countries to travel to Gaza in a symbolic gesture to challenge the Israeli blockade of one of the poorest regions on earth. The 500 peace activists on board 10 boats will include musicians, writers, Nobel Laureates, Holocaust survivors and members of parliament.....

In a region that is rife with opportunities for political stances - or at least a measurable shift in policy - the US State Department and its chief diplomat have offered nothing but inconsistency and contradiction. Now, thanks to a group of peaceful civil society activists, including many pacifists and elders, the State Department is getting its decisive voice back. And the voice is as atrocious and unprincipled as ever."
Posted by Tony at 4:30 AM