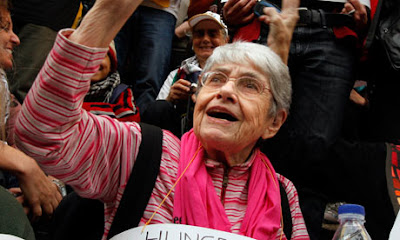 (Hedy Epstein, a Holocaust survivor who will join the Gaza flotilla.)

"The Foreign Press Association has accused the Israeli government of using "threats and intimidation" to stop media coverage of a 10-ship flotilla due to sail to the Gaza Strip this week.

The ships are sailing to protest against Israeli restrictions on Gaza and to commemorate last year's flotilla, which was intercepted by the Israeli navy, who killed nine of the Turkish participants.

Israel has restricted the supply of goods and the movement of individuals in Gaza since Hamas took control in 2007.

Two of the ships, the Tahrir and the Audacity of Hope, are docked in Athens, where the harbourmaster has banned the latter from leaving port until its seaworthiness is established....

Israel has been engaged in a diplomatic campaign to prevent the flotilla from setting sail. Hillary Clinton, the US secretary of state, said last week that the flotilla was not "useful" and consular officials tried to persuade US nationals in Athens not to join the flotilla.

On Sunday Israel warned journalists, who will make up a minority of the passengers, not to travel with the flotilla.....

The Foreign Press Association, which represents the international media in Israel, said the threat to punish journalists covering the Gaza flotilla raised serious questions about Israel's commitment to freedom of the press. "Journalists covering a legitimate news event should be allowed to do their jobs without threats and intimidation. We urge the government to reverse its decision immediately," it said."
Posted by Tony at 11:59 AM