Tens of Thousands of Syrians Protest in Central City of Hama 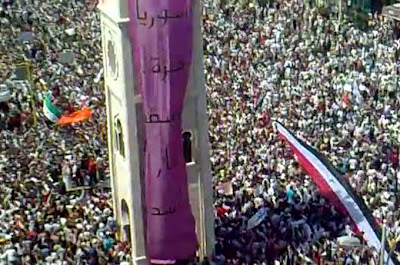 "BEIRUT, Lebanon — In what may mark a decisive turn in nearly four months of unrest, tens of thousands of protesters gathered Friday in the central city of Hama for what activists called the country’s biggest demonstration so far, returning the city that bore the brunt of a ferocious government crackdown a generation ago to the forefront of rebellion.

Estimates of the crowd were difficult to verify, and activists have sometimes exaggerated the turnout in protests challenging more than four decades of rule by the Assad family. But the scenes of protesters pouring into a central square in the city, captured by activists and circulated on the Internet and Arab satellite channels, seemed to signal a new stage in an uprising that has so far only aspired to rival the mass protests that ousted authoritarian leaders in Egypt and Tunisia.