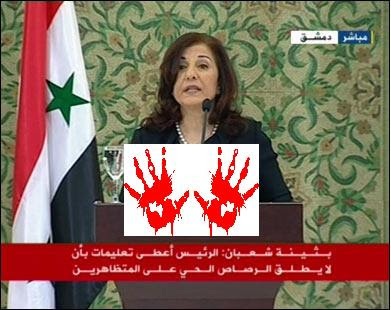 "I am still pissed at the interview with Skynews that was conducted with Buthayna Sha`ban. I posted it yesterday. She referred to the innocent civilians killed by regime soldiers as "collateral damage", very much the way the US dismisses the scores of civilians who are killed by its bombs and rockets in Iraq, Afghanistan, Libya, and Yemen and many other places. Here is an intellectual recruited by the Asad regime and is standing by it in those times. But when she lends propaganda help to the regime in its killing of its citizens she becomes part of the killing apparatus of the regime. This is another low of the Asad regime and its lousy propaganda. "Collateral damage" was invented to dismiss and justify the murder of brown people by the White Man. Now we see it used to dismiss the killing of civilians by the Syrian regime. Sha`ban achieved a record of baseness of the Syrian regime, and when the regime falls she will be made to account for this terrorist language....."
Posted by Tony at 7:47 AM