An Israeli trap for Britain 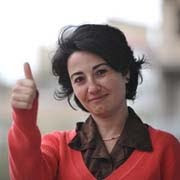 In arresting Sheikh Raed Salah, the UK authorities support the persecution of Arab citizens of Israel

"The decision to ban the Palestinian leader Sheikh Raed Salah from entering Britain, and then to arrest him, was transparently not based on any serious examination of his political activities. It was an ugly kneejerk response to the growing hostility of the Israeli establishment and its supporters abroad towards anyone opposing its racist policies – and a rising tide of Islamophobia in Europe....

The British authorities have fallen into an Israeli trap. Instead of supporting our leaders and their campaign for freedom and democracy, they are supporting Israeli persecution of the Palestinian citizens of Israel. Until now, Palestinian citizens of Israel have been struggling for our political rights in our country, and confronting Zionist racism inside Israel. But now it seems we have to confront Zionist racism abroad as well.

The pro-Israeli lobby must not be allowed to determine politics in Britain. Palestinians in Israel see the arrest of Salah by the British authorities as backing Israeli policies against us. We ask the British people to reject this, not to allow Israeli racism to inform them and support instead our just demands for democracy in our own land."
Posted by Tony at 2:14 PM