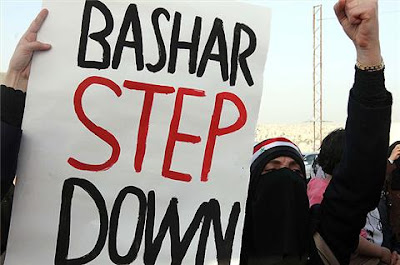 The proximity and political relationship with Syria has left demonstrators at odds over Bashar al-Assad's crackdown.

"....More than 35 years after the rise of the Lebanese left and the start of the civil war, people across Syria have risen up against decades of oppressive Baath party rule in their own country. Since demonstrations began in March, rights groups estimate that security forces have killed more than 1,000 protesters, and rights abuses are believed to be widespread.

President Bashar al-Assad and his Baathist regime have drawn global condemnation for the brutal crackdown on demonstrators. However, Beirut-based activists, many who have worked together against issues like sectarianism and in support of Palestinian and other Arab revolts, now find themselves split over their positions on the protests in Syria....

One of the journalists who has been reporting frequently in Lebanon's Arabic media from inside Syria is Ghadi Francis. The 22-year-old is a former member of the SSNP, but was kicked out of the party for her reporting in the Beirut-based As-Safir newspaper that "didn't reflect the party's political views", she said.

Francis has traveled across Syria since protests began in March, and has spoken with a wide range of people, including many protesters, and witnessed demonstrations in a number of cities and towns around the country. She concluded that it's a "true crime" to "paint the [people protesting in the] street or the regime with one colour".

Francis said one group of protesters was protesting for basic demands such as for jobs and water, while another wanted more political rights. A third group, she said, is protesting strictly for religious reasons. It is this third group that has many secular activists in neighbouring Lebanon worried.

However, Francis said that the blame lies with the secular Baathist regime in Syria, which for more than four decades "has left people with no other place to gather [and organise]" outside of religious spaces.

"Leftists [in Beirut] are right to be against the regime, but they're not right to judge [the protesters] from the culture in Hamra," said Francis. "Anyone has to go to witness it and talk to people."

Activist Abdul Khalak argued that, because politics and society are tightly interconnected, most politicians in Lebanon from across the political spectrum have remained largely silent on Syria. "Lebanon wants stability in Syria to make sure there is stability in Lebanon," he said.

However, activists such as Saksouk argue the question of stability is irrelevant to a people's call for change.

"A fear of what's going to happening [exists] in every context," she said. "I'm fearful of people in Egypt hijacking the revolution like in Libya, and I'm totally scared of what's happening in Bahrain. But we have to be hopeful and we can't ask people not to revolt because we're scared about the future. That is exactly what these regimes want us to think.".....

"A change in Syria will allow freedom to go on a promenade like a beautiful young woman. On a promenade, naked, and with no fear on the shore of the Mediterranean sea.""
Posted by Tony at 4:44 AM