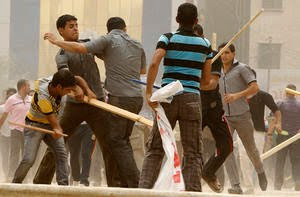 In the days following the attack, Human Rights Watch interviewed more than 25 demonstrators who said they were punched, beaten with sticks or other weapons, or stabbed during the June 10 assault. Human Rights Watch observed and witnesses said that security forces stood by and watched in several instances. Several organizers told Human Rights Watch that the attacks have had a severe chilling effect on people exercising their right to peaceful assembly. In the two Friday demonstrations since then, on June 17 and 24, many regular protesters and organizers have stopped attending the demonstration, mainly because of fear of attacks, they said.

"Instead of protecting peaceful demonstrators, Iraqi soldiers appear to be working hand in hand with the thugs attacking them," said Joe Stork, deputy Middle East director at Human Rights Watch. "The Iraqi government needs to investigate why the security forces stood by and watched as thugs beat and sexually molested protesters - and take action against those who did so."....."
Posted by Tony at 3:03 AM