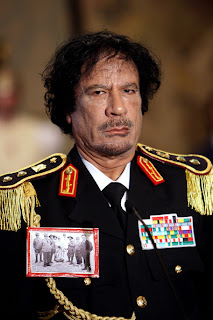 Pursuit of Justice No Barrier to Lasting Peace

"(New York) - The International Criminal Court (ICC), by issuing an arrest warrant for Muammar Gaddafi, signaled that the law can reach even those long thought to be immune to accountability, Human Rights Watch said today. The ICC judges granted warrants on June 27, 2011, for Gaddafi, the Libyan leader, his son Seif al-Islam, and Libya's intelligence chief, Abdullah Sanussi. They are wanted on charges of crimes against humanity for their roles in attacks on civilians, including peaceful demonstrators, in Tripoli, Benghazi, Misrata, and other Libyan cities and towns.

Issuing the warrants was an important step to providing the victims of serious crimes in Libya the chance for redress. Despite concerns that an arrest warrant against Gaddafi would act as an obstacle to finding a solution to the conflict in Libya and thus discourage the Libyan leader from relinquishing power, it is unlikely that there is a connection between the ICC investigation and Gaddafi's refusal to step down, Human Rights Watch said.

"Muammar Gaddafi already made clear he intended to stay until the bitter end before the ICC process was set in motion, and his son's February vow to ‘live and die in Libya' speaks for itself," said Richard Dicker, international justice director at Human Rights Watch. "It beggars belief that a dictator who has gripped power for over 40 years would be frozen in place by this arrest warrant."

Human Rights Watch documented the arbitrary arrest and disappearance of scores of people, as well as instances in which government forces opened fire on peaceful demonstrators after the start of anti-government protests in eastern Libya on February 15......"
Posted by Tony at 3:35 AM