Arab revolts - past and present 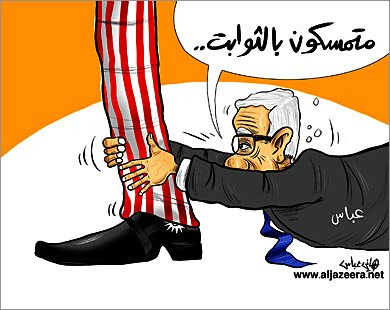 Arabs have historically revolted every decade against rulers and the west has counter-revolted most attempts.

This brings us to the Palestinian scene. The Palestinian uprising or intifada of 1987 was the first unarmed massive civilian revolt to take place in decades. It was in the wake of the fall of the Soviet Union and the first US invasion of the Gulf that the United States decided to co-opt the Palestinian uprising by giving political and financial benefits to a PLO class of bureaucrats who would proceed to sell out the Palestinian struggle. Thus Arafat neutralised the uprising at Oslo in 1993 and went on to wine and dine with Israel's and America's leaders while his people remained under occupation.

But If the Palestinians were a source of concern to the Arab regimes after 1968 lest they help other Arabs revolt against their dictatorships, today, it is the Palestinian Authority (PA) that is worried that the Arab uprisings may influence West Bank Palestinians to revolt against the PA, which continues its intensive security collaboration with the Israeli occupation and its US sponsor. Indeed, while the Israelis failed in the late 1970s in their effort to create a political body of Palestinian collaborators through their infamous Village Leagues, the PA became, not the new "Urban Leagues" that many Palestinians dubbed it, but a veritable National League of collaborators serving the Israeli occupation. The PA's recent bid for statehood and recognition at the UN and at UNESCO is an attempt to resolve the current stasis of its non-existent "peace process" and the dogged negotiations with the Israelis before the Palestinians revolt against it, especially given the dwindling dividends to the beneficiaries of the Oslo arrangement.

The PA indeed has two routes before it in the face of the collapse of the so-called "peace process": dissolve itself and cease to play the role of enforcer of the occupation; or continue to collaborate by entrenching itself further through recognition by international institutions to preserve its power and the benefits to its members. It has chosen the second option under the guise of supporting Palestinian national independence. How successful it is going to be in its entrenchment bid remains to be seen, though its success or failure will be calamitous for the Palestinian people who will not get any independence from Israeli settler colonialism as long as the PA is at the helm.

As I have argued before, the Israeli-PA-US disagreement is about the terms and territorial size of the disconnected Bantustans that the PA will be given and the nature and amount of repressive power and weapons its police force would have to use against the Palestinian people, while ascertaining that such weapons would never have a chance of being used against Israel. If Israel shows some flexibility on those, then the disconnected Bantustans will be quickly recognised as a "sovereign Palestinian state" and not a single illegal Jewish colonial settler will have to give up the stolen lands of the Palestinians and return to Brooklyn, to name a common place of origin for many Jewish colonial settlers. It is this arrangement that the PA is trying to sell to Israel and the US. Without it, the PA is threatening that West Bankers may very well revolt against it, which would be bad for Israel and the US. So far, neither the US nor Israel is buying it.

As for the larger Arab context, those who call what has unfolded in the last year in the Arab World as an Arab "awakening" are not only ignorant of the history of the last century, but also deploy Orientalist arguments in their depiction of Arabs as a quiescent people who put up with dictatorship for decades and are finally waking up from their torpor. Across the Arab world, Arabs have revolted against colonial and local tyranny every decade since World War I. It has been the European colonial powers and their American heir who have stood in their way every step of the way and allied themselves with local dictators and their families (and in many cases handpicking such dictators and putting them on the throne).

The US-European sponsorship of the on-going counterrevolutions across the Arab world today is a continuation of a time-honoured imperial tradition, but so is continued Arab resistance to imperialism and domestic tyranny. The uprisings that started in Tunisia in December 2010 continue afoot despite major setbacks to all of them. This is not to say that things have not changed and are not changing significantly, it is to say, however, that many of the changes are reversible and that the counterrevolution has already reversed a significant amount and is working hard to reverse more. Vigilance is mandatory on the part of those struggling for democratic change and social justice, especially in these times of upheaval and massive imperial mobilisation. Some of the battles may have been lost but the Arab peoples' war against imperialism and for democracy and social justice continues across the Arab world."
Posted by Tony at 4:01 AM