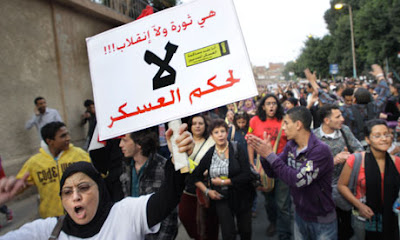 Egyptians demonstrate outside Torah prison, Cairo, on Wednesday in support of Alaa Abd El Fattah, a leading revolutionary figurehead who has now had his detention extended.

"Clashes between Egyptian security forces and protesters have left at least two civilians dead, following major demonstrations across the country.

In Damietta, a port town where the Nile meets the Mediterranean, the army used force to break up mass protests on Sunday which had brought the city to a standstill for several days. Local news reports indicated that at least two protesters were killed and 11 others injured during the violence. Witnesses told the Guardian that the death toll was considerably higher, but this could not be independently confirmed.

"The situation is very dangerous," said Shaaban ElBadahy, a teacher in Damietta. "Protesters have closed off all the ports and roads in the district and no one can enter or leave the city."....

The latest wave of violence adds further pressure on the military junta ahead of this month's parliamentary elections, with opposition to the ruling generals seemingly beginning to spread beyond Cairo and Alexandria and into rural areas....

On Sunday evening demonstrators gathered at Cairo's Qasr el-Nil bridge over the Nile to express their rejection of the junta. The bridge was the location for one of the most significant street battles between protesters and police during the anti-Mubarak uprising earlier this year, and has become synonymous with revolutionary victory by the people over the security forces."
Posted by Tony at 4:38 PM