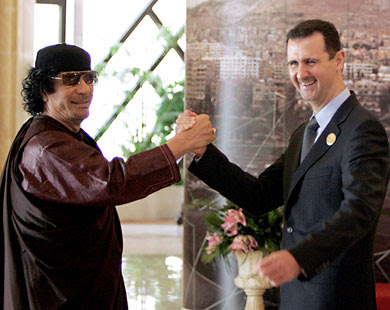 Whether western powers will now intervene is unclear, but move suggests Assad's fellow leaders no longer expect him to survive

".....What effect will this latest decision have? Assad will now feel more isolated, though earlier Arab pressure did not bring any easing of the bloody repression that the UN says has claimed 3,500 lives since March. This decision, however, suggests that his fellow leaders no longer expect him to survive.

With the Syrian opposition invited to hold talks at the league's HQ in Cairo, Assad must also fear Arab moves towards official recognition of the Syrian National Council in parallel to recognition of the Benghazi-based Libyan National Transitional Council while Muammar Gaddafi was still in power. Turkey is being pressed to allow the SNC to open an office. Another worry is the creation of safe havens in Turkey and Jordan for Syrian army defectors.

Nabil el-Arabi, the Arab League's secretary general, provided a tantalising glimpse of possible next steps when he spoke of appealing to the UN to take action.....

Everyone acknowledges that the fear is a repeat of a Libyan scenario, where March's Arab League decision to abandon Gaddafi was crucial in paving the way for a UN resolution and eventual Nato action. Most observers acknowledge that a repeat of this is highly unlikely. So while it remains impossible to predict how the bloody Syrian chapter of the Arab spring will end – it is a better bet than before that Assad will not be running things in Damascus when that moment comes."
Posted by Tony at 7:14 AM