In Egypt, the stakes have risen 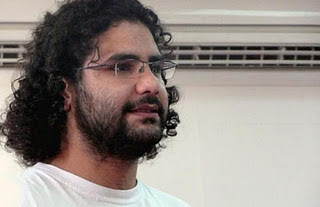 "The Egyptian revolution of 25 January, as we all know, had no leaders. But in the course of its unfolding, and in the months since, a number of people have emerged who are pushing it forward, advocating for it and articulating its principles. Alaa Abd El Fattah, the activist and blogger (and my nephew) who has been jailed by the military prosecutor in Cairo pending trial, is one of those. And in his character and the role he's adopted, he embodies some of the core aspects of the Egyptian revolution.....

The campaigners are working for every person jailed – but there's a sense that the military have now upped the stakes. No one believes that the military believe the charges they've levelled against Alaa; in attacking this central, charismatic figure they appear to be openly mounting an attack on the very spirit of the revolution. It is because of the seriousness of this message that the protests in Egypt and in – so far – 23 cities across the world have been so immediate and so intense. And that Alaa's mother, my sister, Laila Soueif, is on a hunger strike, which others are joining.

The implications of the jail extension – for human rights and the safety of Egypt's young people – are enormous. But the depth and strength of the reaction against this also shows that the revolution could receive a kickstart once again."
Posted by Tony at 4:49 PM