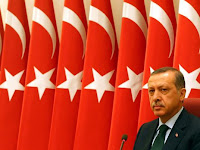 The Arab League's suspension of Syria has outraged Assad, but it is Ankara's hardline stance that may yet prove decisive

"....Fears that a Syrian meltdown could seriously destabilise the wider neighbourhood are also driving Turkey's hardening response. Such a scenario could affect Iraq, where security concerns are rising as the US withdrawal nears completion, and even Iran, a close Assad ally.

For its part, the Syrian regime has pressing reasons to fear Ankara's animosity, as Gökhan Bacik pointed out in Today's Zaman. Unlike many Muslim countries, Turkey identifies strongly with Europe, the US and Nato. And in the past decade, Erdogan's Justice and Development party has made its brand of moderate Islamist politics acceptable to previously blinkered western eyes.

In other words, Turkey, with its majority Sunni Muslim population, furnishes a role model for the disenfranchised Sunni majority in Syria (and other Arab spring countries). Not only is Ankara encouraging revolution in Damascus, it is also living proof that Assad's politics of fear are outdated, that Syrians have before them a workable alternative paradigm, and that, after the revolution, the country's secular, Islamist and other sectarian traditions could fairly hope to co-exist peacefully, Turkish-style."
Posted by Tony at 8:33 AM