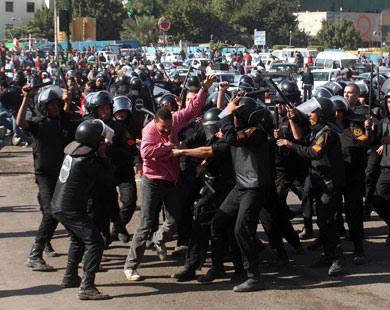 "Thousands of police have clashed with demonstrators for control of downtown Cairo's Tahrir Square, leaving at least one protester dead and 676 others injured, health officials said.....

In scenes reminiscent of the 18-day uprising, protesters and police forces hurled rocks at each other, and crowds swarmed an armored police truck, rocking it and setting it ablaze.

Security officials said that protesters were rallying outside security agency headquarters in the port city of Alexandria as well as the cities of Aswan in the south and Suez on the Red Sea.

Media reports said at least one protester was killed in Alexandria...."
Posted by Tony at 6:43 PM