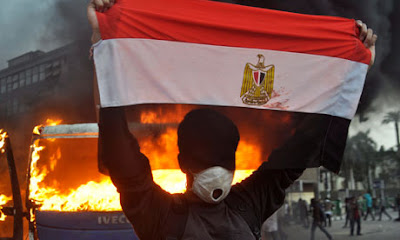 "Egypt has been hit by another wave of major violence ahead of parliamentary elections after security forces opened fire on thousands of protesters demonstrating against the military junta.

More than 500 people were reported injured in central Cairo after riot police sent volleys of tear gas, rubber bullets and "birdshot" pellet cartridges into the crowds. The clashes put further pressure on the ruling generals and cast doubt on the ability of police to secure the poll, scheduled to begin on 28 November.

"All options are on the table, but right now – given the state Egypt is in – nobody can see how the military council can pull off these elections," said Mahmoud Salem, a prominent blogger who is running for parliament but who has now frozen his campaign. "I'm at the international eye hospital at the moment with my friend Malek Mustafa, who has been shot in the head by police with a pellet cartridge and looks likely to lose his eye. How can I continue?"....

Many expressed scepticism about the elections, saying they were designed to entrench military control over the country, but most insisted they still wanted the vote to go ahead. "The generals want to rule Egypt, but this is our revolution," said Ahmed Mohamed, a 24-year-old accountant. "Look around you – you don't see different political parties or rival candidates, you just see the Egyptian people. People have come down from their homes to join the fight; we are battling the remnants of Mubarak's regime who remain in power at the moment, and both this and the elections are all part of that same process."

Solidarity rallies also erupted in the large cities of Alexandria and Suez......"
Posted by Tony at 12:46 PM