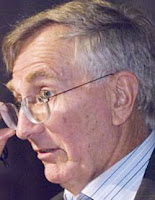 "....
It is possible, of course, that Iran has simply circumvented the reconnaissance efforts of America and the I.A.E.A., perhaps even building Dick Cheney’s nightmare: a hidden underground nuclear-weapons fabrication facility. Iran’s track record with the I.A.E.A. has been far from good: its leadership began construction of its initial uranium facilities in the nineteen-eighties without informing the Agency, in violation of the nonproliferation treaty. Over the next decade and a half, under prodding from ElBaradei and the West, the Iranians began acknowledging their deceit and opened their enrichment facilities, and their records, to I.A.E.A. inspectors.

The new report, therefore, leaves us where we’ve been since 2002, when George Bush declared Iran to be a member of the Axis of Evil—with lots of belligerent talk but no definitive evidence of a nuclear-weapons program."
Posted by Tony at 4:55 AM