The struggle for Syria 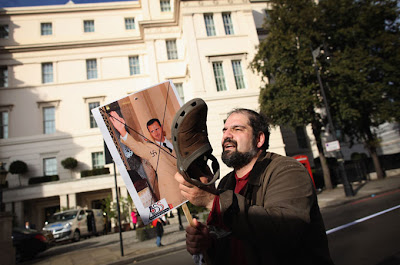 The Syrian people are being sacrificed at the altar of US imperialism, says author.
Joseph Massad
Al-Jazeera

For the first time, I find myself in disagreement with Joseph Massad about his central conclusion that the Syrian uprising has been defeated and that it should abandon the fight for freedom and democracy. I agree that it should be wary of the counter revolutionary effort to contain it, but that does not mean to abort the uprising.

".....In this context of a US-dominated world, those in Syria who legitimately have struggled and are struggling to bring about an end to dictatorship must face up to a few central questions, now that the Arab League and imperial powers have taken over and assumed the leadership of their struggle: Is the aim of their ongoing uprising the overthrow of the Asad regime in order to bring about a democratic regime, or is it simply to overthrow Asad? As the Iraqi and Libyan precedents make clear, the Arab League and imperial powers have taken over the Syrian uprising in order to remove the Asad regime and replace it with a US-obedient regime like the ones installed in all other Arab countries. The second question for the Syrian demonstrators is clear and unequivocal: given the aim of imperial forces and the Arab League, do Syrian demonstrators understand the new leadership of their struggle by Gulf dictators and the United States as the final defeat of their uprising or as a necessary step for their uprising to succeed?

Those who see the Syrian popular struggle for democracy as having already been hijacked by these imperial and pro-imperial forces inside and outside Syria understand that a continuation of the revolt will only bring about one outcome, and it is not a democratic one - namely, a US-imposed pliant and repressive regime à la Iraq and Libya. If this is what the Syrian demonstrators are struggling for, then they should continue their uprising; if this is not their goal, then they must face up to the very difficult conclusion that they have been effectively defeated, not by the horrifying repression of their own dictatorial regime which they have valiantly resisted, but rather by the international forces that are as committed as the Syrian regime itself to deny Syrians the democracy they so deserve. In light of the new move by the Arab League, the US, and Europe, the struggle to overthrow Asad may very well succeed, but the struggle to bring about a democratic regime in Syria has been thoroughly defeated......"
Posted by Tony at 4:08 AM