Déjà Vu All Over Again: Plea to the West: Syria needs Libya-style intervention 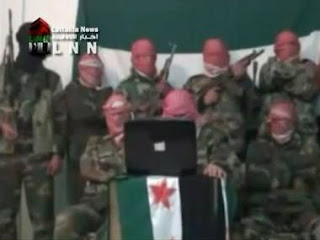 "As violence in Syria intensifies with an attack by anti-government forces on an air defence intelligence complex near Damascus, a senior Arab diplomat in London says Middle Eastern states opposing the Syrian government need West European leadership similar to that seen in the Libyan war.[Red Flag Warning: The Counter Revolution Wants to Hijack The Syrian Uprising!]

He said that what was needed was "a team captain" to co-ordinate moves to put pressure on Syria, and only the Europeans could do this. The US is preoccupied by domestic politics and "in the Middle East everybody is driven by ego. How can you have a regional policy when they [local rulers] can't talk to each other?"

The diplomat added that a crucial turning point would come in Syria if the anti-government forces succeeded in establishing an independent enclave like Benghazi in Libya. He thought this was more likely to happen in the north on the Turkish border rather than around Deraa, north of the Jordanian frontier, where the protests began. The existence of such an enclave would raise the possibility of setting up a no-fly zone......"
Posted by Tony at 4:20 AM