Bibi’s Three Steps Forward, One Back 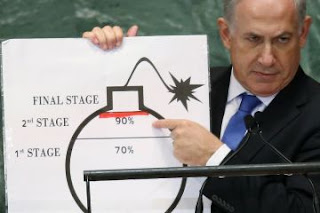 "There seems to be a delusion reigning in Washington. After Israeli Prime minister Benjamin Netanyahu’s cartoonish presentation at the United Nations General Assembly and implicit signaling that he would not unilaterally attack Iran before the U.S. elections, there is a belief that Netanyahu caved to President Barack Obama. But did he really?.......

Once again, the threat of military action had succeeded in yielding more sanctions on Iran, limiting Obama's diplomatic maneuverability, and getting a U.S. commitment for a trip wire for war with Iran.

Netanyahu's strategy has been to take three steps forward and, occasionally, once he has gotten what he wants, he takes a step back.
Declaring victory every time Netanyahu agrees to back off temporarily confuses tactical developments with the larger strategic picture. It is a fundamental misunderstanding of Netanyahu's strategy: Even though he temporarily dials down his pressure on the U.S., he has nevertheless ensured that the trajectory of developments are in his favor; that is, the U.S. and Iran inch closer to a confrontation.
Not bad for a guy who gives cartoonish presentations at the U.N."
Posted by Tony at 4:19 AM