A Year On, No Progress on Inquiry Into Deaths 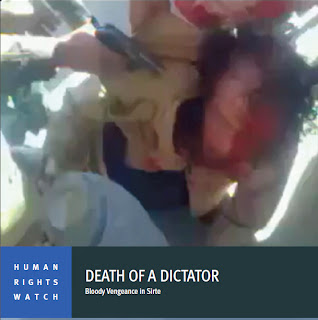 "(Beirut) – New evidence collected by Human Rights Watch implicates Misrata-based militias in the apparent execution of dozens of detainees following the capture and death of Muammar Gaddafi one year ago. The Libyan authorities have failed to carry out their pledge to investigate the death of Gaddafi, Libya’s former dictator, his son Mutassim, and dozens of others in rebel custody.

The 50-page report, “Death of a Dictator: Bloody Vengeance in Sirte,”details the final hours of Muammar Gaddafi’s life and the circumstances under which he was killed. It presents evidence that Misrata-based militias captured and disarmed members of the Gaddafi convoy and, after bringing them under their total control, subjected them to brutal beatings. They then executed at least 66 captured members of the convoy at the nearby Mahari Hotel. The evidence indicates that opposition militias took Gaddafi’s wounded son Mutassim from Sirte to Misrata and killed him there....."
Download the full report (PDF, 6.64 MB)
Posted by Tony at 3:29 AM