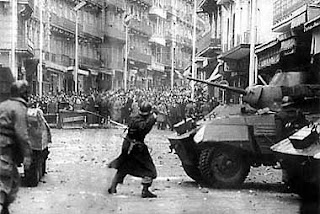 "The French president, François Hollande, has acknowledged that Algerians were massacred during an independence rally in Paris in 1961, ending decades of official silence over one of the darkest chapters of postwar French history.

The massacre has been widely recorded by historians, who say more than 200 people may have been killed.
The statement, which came as Hollande tries to improve relations with Algiers before a visit there in December, was the first time a French president had publicly accepted the killings took place.

As Algeria's battle for independence spilled into France, the Paris police chief, Maurice Papon, ordered police to crack down on thousands of Algerian protesters who had defied a curfew.

"On 17 October 1961, Algerians who were protesting for independence were killed in a bloody repression. The Republic recognises these facts with lucidity," Hollande said in a statement on Wednesday. "I pay homage to victims 51 years later."...."
Posted by Tony at 3:34 AM