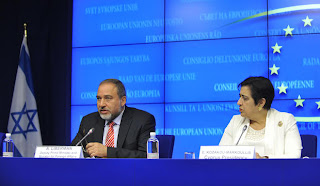 In fact, the European Union is steadily upgrading its relations with Israel while overwhelming, and growing, public majorities across Europe’s largest nations view Israel “mostly negatively.” According to a recent BBC GlobeScan poll, Israel is on a par with North Korea as the third worst perceived country in the world (“Views of Europe slide sharply in global poll, while views of China improve,” GlobeScan, 10 May).....


Atoning for the Holocaust?

This leads most sober Palestinians to conclude that the Holocaust-guilt-ridden European establishment wishes to wash its hands of its genocide against European Jews, among others, by imposing on the Palestinian people an unjust “peaceful” settlement of this essentially colonial conflict that would leave Israel with almost full control over the West Bank, including Jerusalem, and over the Palestinians’ economy, most fertile lands, water aquifers, borders and their very destiny......"