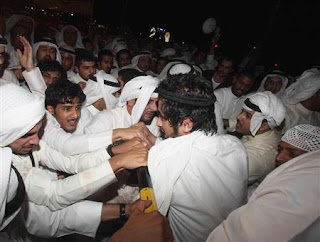 "(Reuters) - Kuwaiti security forces detained at least five people, including the son of a prominent opposition figure, at an anti-government protest against possible changes to an election law, witnesses said on Tuesday.
Several people were hurt in skirmishes at the rally, attended by at least 5,000 people who defied a request by authorities to cancel Monday's late evening demonstration.
In some of the strongest remarks by an opposition figure, former parliament member Musallam al-Barrak appealed directly to Kuwait's leader to avoid "autocratic rule" in a speech to the crowd....."
Posted by Tony at 4:13 AM