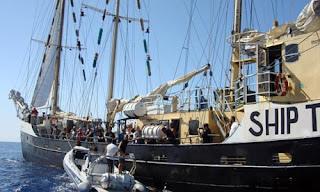 Israeli marines board the Estelle and direct it to port of Ashdod as 30 activists on board attempt to break Gaza blockade
guardian.co.uk, Saturday 20 October 2012


A military spokeswoman said no one was hurt when marines boarded the Estelle, which was rerouted to Israel's southern Mediterranean port of Ashdod.

A campaigner said the boat had "come under attack" after being pursued by Israeli naval vessels.

Activists said they lost contact with the Swedish-owned, Finnish-flagged boat early on Saturday.


"The Estelle is now under attack. I have just had a message from them by phone. Some time ago, they said that they had military ships following them," Victoria Strand, a Stockholm-based spokeswoman for the Ship to Gaza Sweden campaign, told Agence France Presse (AFP).

She added that it was unclear what the activists onboard meant when they said they had been attacked.


The Estelle is carrying 30 activists from Europe, Canada and Israel, humanitarian cargo such as cement, and goodwill items such as children's books......"
Posted by Tony at 7:03 AM