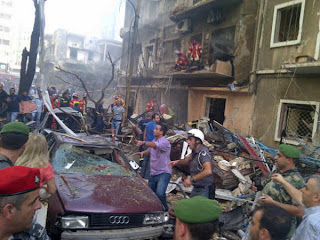 For those who want to know more about Wissam al-Hassam, the assassinated security chief, Elias Muhanna is posting information and links on his Qifa Nabki blog.

Wissam al-Hassan was one of the most important security figures in Lebanon. He headed up the Information Branch of the Internal Security Forces (i.e. the Lebanese police), and was recently responsible for arresting Michel Samaha, a former minister with close ties to Syria, for allegedly conspiring to have explosives blown up all around Lebanon in a bid to create havoc.
The move was seen as hugely destabilising in Lebanon — because Wissam al-Hassan is very close to the March 14th coalition while Samaha had long been regarded as “untouchable” because of his connections to Damascus — and yet none of Samaha’s Lebanese allies demanded his release.
Wissam al-Hassan also has a very interesting role in the investigation of the Hariri assassination, which we’ll discuss later as well.

News of Wissam al-Hassan's death now appears to be official.
Some observations from Guardian journalist Martin Chulov.......
Posted by Tony at 9:40 AM

"....He is beyond despicable what a lousy man."

He has lately shown, beyond doubt, his sectarian tendencies even though he claims to be non-sectarian.

The Syrian uprising is putting the feet of many so-called leftists to the fire, and not just the Lousy Arab's.